Can a man increase his pulling power by reading female-friendly erotica?

Occasionally I get nostalgic for the era when your average fumbling teenage lad thought a clitoris was a small island off the West coast of Africa – but not often. 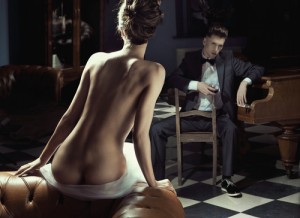 Every woman longs for an experienced lover who can intuit their most secret sexual proclivities without them having to spell it out. The impossible fantasy of a man who is sexually imaginative, monogamous, loves every millimetre of the female physique, who is romantic, doesn’t break wind in bed and is effortlessly gorgeous.

Men who read at all are sexy to me, but a straight man who had a wide knowledge of female-friendly erotica and was able to articulate intelligently (without getting overexcited) and could contribute to a lively conversation about Fifty Shades of Grey with a bunch of yummy mummies while picking up the kiddies at school would be definitely seen as very sexy indeed. However this should be caveated: “I love erotica” as a pick-up line at a bar would not wash.

Final verdict: If a bloke is genuine about liking and reading erotica and subtle about showing his smarts off – it would increase his chances. At the very least it would give him a scenario he could spring on the girlfriend if things were getting a little flat between the sheets.

Many of my stories are really appreciated by men – I get a lot of feedback from guys who have read some of my collections and are surprised at how much they enjoyed them.

Promo of Picture This - latest thriller

Occasionally I get nostalgic for the era when your average fumbling teenage lad thought a clitoris was a small...
View all videos